You can sense an age-old tension that exists in modern and historic museums across the globe. How do you protect expensive (or even priceless) paintings, sculptures and assorted artifacts while also giving the public the most appropriate access?

Visitors want to get as close as possible to admire and explore the masterpieces. In many cases, museum staff has one major rule: don’t touch.

Exceptions abound, which simply adds a confusion variable to the more common need to create some contrast between artwork and the guests.

For example, science and children’s museums are full of interactive exhibits ranging from smile-inducing body sounds and hair-raising electromagnetism to water-themed, hands-on installations about rivers, lakes and more.

In 2019, The Dorothy and Charles Mosesian Center for the Arts in Watertown, MA presented Please Touch the Art, an exhibition with more than 50 pieces of art focused on sight, touch, sound, and smell.

Typically, museum goers know they aren’t permitted to touch artwork that can be broken or affected by oil and grime on fingers and hands. Unwelcomed interaction ensures that the painting, vase, statue, and other objects will never be in their original form.

That’s why visitors are expected to look without reaching to touch Eva Gonzalès' Nanny and Child at the National Gallery of Art in Washington, D.C. or the Buddha Shakyamuni Seated in Meditation (Dhyanamudra) granite sculpture at the Art Institute of Chicago.

People have the urge to touch for many reasons, including:

Get the Basics Right

Review how you convey no touch policies to visitors, beginning with printed materials (brochures, maps, etc.) and your website. Signs can vary in size, color, wording, location and more. Often, lighting plays a critical role. Monitor guest comments and make adjustments based on their feedback.

The mere presence of cameras – if visitors even notice them – may help. Fewer people will think about touching artwork if they suspect someone is watching a panel of screens elsewhere in the museum. They won’t know that many systems are more for reviewing an incident after the fact rather than active surveillance.

Museum staff continuously debate how to deal with glass as a protective barrier for paintings, statues, and historic objects. Clearly, the glass helps prevent damage, but it’s often perceived as something that detracts from before someone’s ability to enjoy the artwork. Similarly, poles and velvet ropes either reinforce the exclusivity of the art or distract from it while also keeping visitors too far away.

You can adjust your operations at times by regularly reviewing data from other museums/peers based on their experiences. Learn about their steps to implement procedures, policies and technologies that allow them to accurately document and collect the data related to visitor behavior.

Even with the right policies people are still prone to take selfies that can go horribly wrong.

In 2013, a man touched a finger and broke it off a 600-year statue in Florence's Museo dell'Opera del Duomo.

A woman in 2017 crouched down for an exhibit photo at the 14th Factory in Los Angeles. She bumped one pedestal in a row, which instantly made the rest fall over in a domino effect.

How do you prefer that your guards confront visitor who touches on object? In the worst case, a guard may hesitate when a situation develops. Failure to act could lead to a glaring hole that will ruin a painting in the wink of an eye.

It may not be enough to say, “Please don’t touch the statue.” What happens next when the patron denies what he or she just did? Will the situation escalate when someone become defensive or embarrassed?

Museum directors know too well that guards can also be accused of bias when they ask some people to kindly step away – even if they don’t directly point out that they saw a hand on the artwork. If your staff catches one person touching artwork, but fails to see the same behavior of another, accusations of targeting or bias may result. A public relations nightmare can soon follow if this incident is posted on social media.

Some museums complement the guard presence with guides and attendants (sometimes called docents). Guards can answer questions and enforce the rules, but additional staff can help educate visitors about exhibit and step in as needed if someone touches an object. It’s always helpful to have a different perspective if a visitor doesn’t follow the rules.

Identify the Scope of the Problem

Museum leaders routinely tell us that they don’t believe touching is a significant issue. But their conclusions are based more on instinct and limited reports by security guards.

Executives and the people they supervise often don’t see evidence of touches or damage. Occasionally, they may note when they encounter someone touching an object. Or, they’ll notice that a historic chair cushion is indented. And yet, museums don’t keep regular records of incidents. As a result, they don’t realize the scope of the problem.

Many museums have found that guard-reported touches are only a fraction of the actual touches. At the end of the day, guards will only report so much. They aren’t in every gallery at all times. And it’s safe to say that they may not document every touch that occurs under their watch.

No one can certainly expect to get any data from rule breakers. Would they turn themselves in several hours or days later? Would they email museums links to their social media profiles filled with the selfies they take with famous artwork?

Museum security is more complex than protecting artwork from theft. Designed both to protect your collections and identify security issues, our installations have shown an average of 75 times more object touches than security officers are reporting. Art Sentry can help you prevent your next incident. 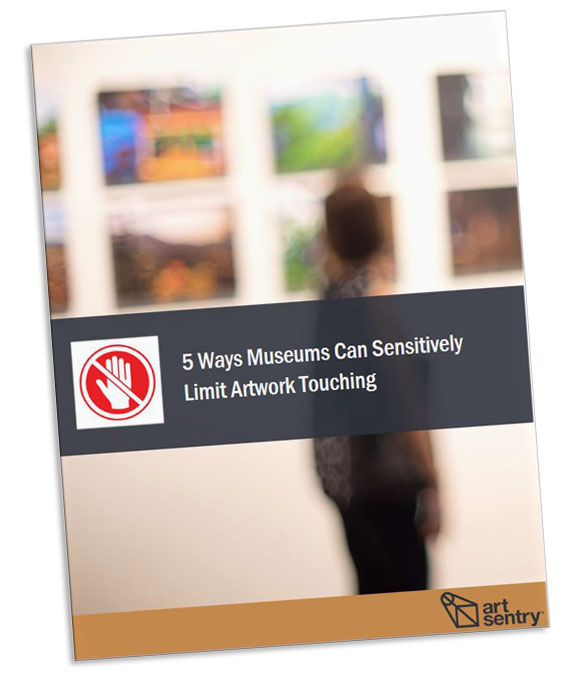